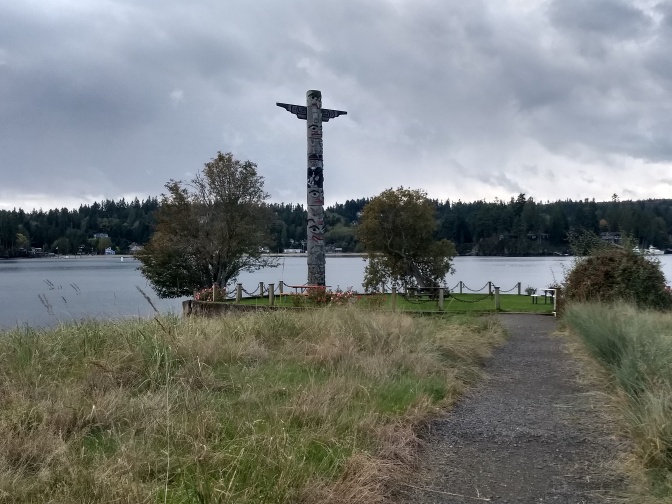 The totem pole at Port Ludlow

Monday, October 7, was a quiet, restful day!  Joy and I enjoyed lovely walks around the Port Ludlow Marina, among the waterside condos, out to a rose-bordered park centered on a totem pole that traces Port Ludlow’s history, and then along the smooth, sandy beach in weather that was largely quite cool and drizzly but that blessed us with occasional glittering, sunny intervals. In the afternoon, after I had bought myself a huge “Huckleberry Heaven” ice cream cone in the Marina’s charming shop and had a nap, we made an “emergency” visit to the pump-out station to evacuate the holding tank after I noticed some unpleasant-looking brown drizzles snaking down the boat’s hull. Our tank-level gauge had indicated that we had plenty of room, and Walt had believed it while I had not (I was proved to have been correct). Following the pump-out, the gauge began to read correctly–a substantial relief!