I’m writing tonight from the dock at the amazing home of Sean, one of Martin’s friends from his college days, and his parents, on Gambier Island near Vancouver BC. We can hear the waves as they splash against the rocks and driftwood below the house at the end of another very warm and windless late-summer day.

We slept later that we’d intended to this morning, encountered some trouble with a tangled stern line as we pulled it aboard from its overnight residence around a madrona tree, had no difficulty hauling up the anchor, and motored out of White Rock Cove on Jedediah Island at low tide at a little after 10 am.

We found narrow Little Bull Passage between Jedediah and Bull islands to be one of the most spectacular channels we’ve traversed. Lined on both sides by fantastical formations of rock with crevices and caves at the water’s edge shimmering with the ever-shifting webs of light woven by reflected sunbeams, the waterway curved among gigantic boulders blanketed with plush golden-brown moss; madrona and fir trees stretched their long leafy arms out over the passage; and I admired the rocks’ colorful layers of bright lime green, dusty sable, rusty amber, snowy white, and pale charcoal, usually topped by golden carpets of  dry grasses. My photo certainly does not do end of the magical passageway justice! 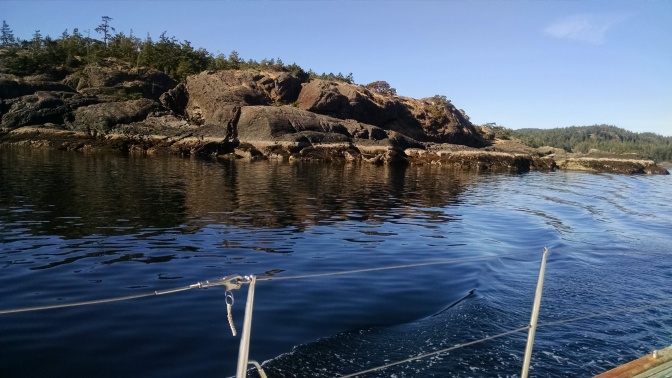 It wasn’t long before we were away from the islands and out in Georgia Strait with little to no wind. Suddenly one and then another whale spout caught my eye, and we watched for about half an hour while two whales (probably humpbacks, judging from the tail I saw) played at some distance, arching their backs, displaying their dorsal fins, and shooting fans of spray skyward–such fun! Because we had sufficient connectivity, Walt and I were able to catch up on our e-mail and to do some online writing and reading as we traveled for about five hours over the silky sea. We encountered some cruising seals and some engine-powered vessels from time to time (there was never enough wind to provide any energy), including a power boat that was coming at Braesail from our port side, meaning that our boat should have had the right-of-way and stayed on course while the other craft turned to avoid us, but the power boat kept coming straight for us, despite our blowing our noisy air horn in its direction twice–when the boat came close enough, we could see no one at the controls. Finally, to avoid a collision, I turned Braesail hard to port so that she would cross behind the power boat, and we waited until it was well clear of our path before resuming our course. Walt expressed his displeasure at the power boaters’ behavior (contrary to all regulations) over the radio, but they probably didn’t have theirs turned on (as is required).

Walt served our usual on-the-go sandwich lunch in the early afternoon, and we turned into Howe Sound a little before 3 pm. We were in Center Bay on Gambier Island by about 3:30, Sean was on the dock to greet us and help us tie up, and soon his parents, uncle, and aunt joined us for introductions and a tour of Braesail. We in turn were treated to a tour of Sean’s parents’ house, built from materials found on the island and made usable by Sean’s father. The small-but-stunning house harmonizes perfectly with its setting in a forest on a hillside above a tiny bight in the cove where large boulders form an outlook offering a superb ocean view and where a little pocket beach, lined with driftwood, allows for access to the water that’s warm enough for swimming and clear to a depth of around 20 feet. Sean is constructing his own small house near a rock outcropping above the beach, and we toured the structure and its delightful surroundings as well as the large workshop where his father mills his own lumber and where some small boats are being outfitted. What an idyllic spot, from which the occupants can view orcas, seals, and many kinds of waterfowl, including cormorants (I saw one swimming and then diving with a little fish in its bill) and mergansers (seaducks, a family of which has now grown nearly to maturity in the shelter of cove). We all shared snacks and stories and had a splendid time together before Walt and I made our way down the pathway to the dock where Braesail awaited us. Now that I’ve finished writing this entry after enjoying chips and salsa and then a cookie or two with hot chocolate, and Walt has showered and is looking at charts and weather predictions, I’ll see if I’m able to publish my entry and its accompanying photos. I will conclude the day with thanks that we are safe in a gorgeous place, have enjoyed the exquisite beauty of God’s creation, and have made some new friends.