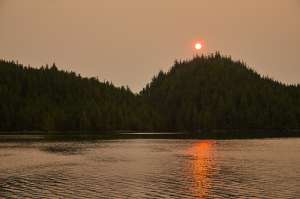 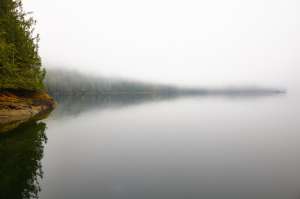 A thick fog had descended over the bay overnight, providing a nice moist layer between us and the persistent wildfire smoke. This failed to dampen our spirits, because we’d managed to secure a reservation at Pierre’s Echo Bay Marina for the storied Saturday Night Pig Roast! (Vegans, here’s your [CW]. You’re welcome.) A few things—and a couple of hours of navigation—stood between us and tasty pork, however. The first order of business after breakfast was boarding Coracle and zooming across the bay to retrieve our two (empty) crab pots. As Murphy’s Law would have it, Coracle’s little gas engine ran itself out of fuel at the furthest possible point, giving me some fine upper body exercise rowing across the bay back to Braesail, as Hans packed up the crab pots for storage.

Upon releasing our stern tie and hauling anchor (thankful for the windlass hauling up 120’ of chain rather than my already slightly tired arms), Hans programmed the route onto Braesail’s navigation system, engaged the autopilot to follow it, and we headed out into the misty greyness, maintaining both active bow and radar watches. As the only wind to be had was our post-breakfast toots, we powered our way down Penphrase Passage as the fog reached sea level. Even with an ‘all hands watch’, we did end up having one close call as a small runabout that didn’t show up on radar condensed from the fog to cut between us and a larger boat that did show up on radar. Once we reached Raleigh Passage, the fog had lifted to allow a reasonable view of the way into Echo Bay. If the fog had stayed down, we would have probably been able dock successfully by following our noses, as the pleasant smell of roasting meat wafted over the inlet. I’d radioed in in advance that I might need an extra couple of hands to get in successfully; this turned out to be a good call, as I had to maneuver Braesail in between two other boats, and this was my first time in a year and a half docking her. I’d managed to get her exactly where she needed to be, but still had a few feet of water between deck and dock—hey, not bad for a first try. A few seconds on the bow thruster and some tugs on the lines put her snug, and we went up to the marina store to register.

After lunch, we gathered on the dock for the afternoon’s entertainment: dog racing! There were about half a dozen dogs of various sizes participating, all resident on various boats in the marina. Each dog would be started by one owner on one end of the dock, and would get called down the dock by their other owner (usually with a treat)…and would have to avoid the distractions of various strategically placed dog treats along the way. The winning dog made a beeline for its owners’ treat, reaching the finish in 6 seconds; the losing dogs ran before being distracted by one or (usually) more of the treats, finishing in 30-60 seconds with much cajoling. A ‘Dog and Boat Owner Look-Alike Contest’ finished it out, and we returned aboard for some relaxing, reading, chatting with fellow boaters on the dock, and preparation of side dishes for dinner.

The Pig Roast was quite the event, and truthfully advertised: the end of the hall featured a horizontal spit, in which one whole pig—nose to tail—had been roasting. Each boater was asked to bring a side dish or two potluck-style, and a large collection of salads, sides and a few desserts crowded two long tables. At least half the items were served up right in the ubiquitous Magma Marine cookware many of us have aboard; apparently I shouldn’t have bothered with plating! After some starting pageantry and remarks, about 100 people filling around 10 tables shuffled through the line to fill plates of goodies…and pulled pork. The stuffed mushroom caps and spinach & artichoke dip we prepared vanished quickly, and the conversation with other boaters was at least as good as the food! After a few days off grid, it did feel good to be sociable again.

View all posts by mkphotomedia