We have been out on Braesail for exactly three weeks now, and this “anniversary day” proved to be an eventful one!

We were greeted by scattered clouds and playful breezes in the morning, and when a teleconference call Walt was expecting didn’t come at about 11 am, we prepared for departure from Melanie Cove in Prideaux Haven after a wonderfully relaxing, but VERY warm, sojourn. We were not far from Desolation Sound Marine Park’s exit at about 11:30 when we saw a number of boats approaching the very narrow rock lined channel. Walt slowed down to let them enter and then proceeded to the exit when we saw a very large power boat, moving far too fast for conditions, coming right at us, and we had nowhere to move without running onto the rocks to starboard. Walt blew our air horn long and loudly, then got on the marine radio, and then shouted at the helmsman but there was no course change; we passed one another with only a few inches to spare, thanks to Walt’s skillful steering, and we were so thankful that there was no collision! An angry Braesail skipper again yelled into the radio’s microphone about the other boat’s very dangerous behavior, but I’m quite certain that the captain of the other vessel was probably listening just as carefully to the radio as he was watching where he was going! WHEW–our Guardian Angels must have been on duty!

Once in the open ocean again I continued to wind our stern tying line onto its large spool, and we talked about what might have happened if the other boat had forced us toward the rocks–the safest course of action would probably have been for Walt to steer into its port side at full speed and force it to ITS starboard side where it would stop, and we would do the same to call our insurance company, the Coast Guard, etc., to report an accident resulting from reckless maneuvering in contravention of a number of marine safety regulations. I hope the elderly man at the helm didn’t cause any other boats any grief!

We had a beautiful motor trip up to the very end of Pendrell Sound, a spectacular anchorage we hadn’t visited for over 20 years, and cruised around the area looking for a place for anchoring and stern tying, since the water is very deep very close to shore and there is little room for boats to swing around at anchor.

By about 1:30 when we arrived, the tide was out, and the exposed rock formations lining the shores were encrusted with oyster shells (the area is a prime aqua culture location). We dropped anchor in about 40 ft. of water and Walt rowed Coracle, the inflatable dinghy, to some rocks that he could climb to reach a small tree up on the bank around which the stern line could be looped with one end tied to Braesail’s stern and the other then rowed back from the shore to be attached to the boat’s stern as well. There was just enough wind to blow Coracle s short distance along the rock on which Walt had left it, an oyster shell slit its PVC/nylon bottom, and air began to escape from the gashed side of the boat (the dinghy’s two side air compartments are separate). Walt made it back to Braesail with the stern line before half of Coracle collapsed, and we were able to tie the line securely.

Joy had prepared sandwiches for Walt and me while we were performing the stern tying operation (it is too scary for her to watch and I dislike it too!), and after we had eaten and rested briefly, Walt and I managed to haul the poor wounded Coracle onto Braesail’s stern deck. During that process, its seat had become dislodged and was floating near Braesail’s stern (when Coracle lost its seat in Princess Louisa Inlet a year ago, the seat sank and Walt had to sit on an overturned bucket in order to row). A kind gentleman who, with several others, was swimming in the warm water (75 degrees!) nearby, retrieved the seat and returned it to us, for which we were thankful! Walt tried to patch the slit in Coracle’s bottom, but the patch didn’t adhere well and the air that he had pumped into the dinghy’s pontoon via a hose equipped with a foot pedal leaked out. He tried a larger patch that we will check tomorrow morning. Walt adjusted the distance of the anchor from the shore and then took a nap in the captain’s cabin; Joy continued reading her novel; and I began work on this blog entry as I again sat on the shady side of the boat, enjoying the caresses of the soft winds breathing through the cedars and firs on the shore and wandering across the deck, listening to the water licking at the rocks and the dulcet calls of the forest birds, and admiring the rainbows of blues and greens that curved along the shorelines as water depths varied and the snow-spangled peak that rises above the wooded mountain slopes and guards the waters of the Sound.

Walt grilled salmon (from COSTCO and very tasty!) and vegetables for a pleasant dinner served on the folding table in the cockpit, and after galley clean-up I enjoyed experimenting with the various photo editing options offered by my Droid Maxx smartphone that I’d never taken time to explore before. Walt continued with his reading for his conference presentation and adjusted Braesail’s bilge pump while Joy and I played three rounds of “Farkel” and, at about 9:30 pm, we watched the silver balloon full moon float slowly upward over the surrounding mountains; if only I could follow the shining path across the water that leads to the luminescent world beneath it! 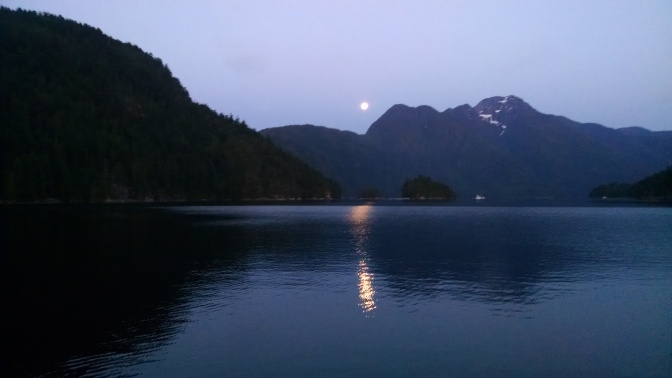