I just came on to relieve Hans at the end of the graveyard shift. Walt D is up on the stick, and we are about 30 miles south of the “Graveyard of the Pacific”. With the sun coming up over the Olympic Mountains to the east, one might think that this is one of Captain Vancouver’s infamous gloomy names (he named some of the most beautiful places in the world “Deception Pass”, “Desolation Sound”, and “Useless Bay”):

the view over the starboard rail to the rising sun

That’s not the case here. Cape Flattery, named by James Cook in 1778, because he thought he might find a harbor to the south of it, is the northwestern extremity of the continental United States. Back in the days before GPS, before LORAN, even before lighthouses on the west coast, mariners heading into the Salish Sea from the Pacific had to know where to turn right based on star observations, land forms, and dead reckoning. Imagine fog. Could you tell—in lovely clear weather—from that view of the sunrise that you are alongside Forks, WA? And if that picture looked like this,

would you guess that you were thirty, forty, or sixty miles from the entrance to the Strait of Juan de Fuca? If you guessed wrong, you wrecked your boat on the rocks at La Push, or on the shoreline of Vancouver Island.

Now it’s different. We are a dot on this, accurate to within about thirty feet:

I might add that on Snow Shoo, we carry redundant charts. There’s the charts on the chart-plotter-radar display in the cockpit. They are what we use for actually piloting the boat. Siting on almost every computer-like device (two iPads, three smart phones, three computers) are charting programs (the chart of Cape Flattery is a screen shot of a NOAA chart from my computer) most of which are running all the time, logging our position every few seconds, so that if the entire Global Positioning System were shut down, we’d know where we were. Setting at the nav station is an inch-thick book of charts, covering the Strait of Juan de Fuca, all around Vancouver Island, and up to Haida Gwaii (the aboriginal name for the Queen Charlotte Islands). Oh, and the harbor charts in the tides and current book (and yes, all the computers calculate tides and currents as well).

Let me be briefly political again. I know where I’m at on the globe within about thirty feet, and as we arrive in Anacortes, I’ll know within six feet of where I’m at. Much of the chart you see was surveyed before the turn of the twentieth century, and is accurate only to the scale of hundreds of feet. Politicians rant and rave about protecting our borders, but frankly, we don’t know where those borders are. On this trip we have experienced, first hand, the results of short sighted failures to invest in the knowledge infrastructure of the United States, particularly since the 1980s. Had we the same weather service data and computer infrastructure that we would have had coming up the Atlantic coast of Europe,  we could have made much better decisions about the shape of El Niño winds. Ignore pleasure boaters like us, and think about that Dungeness crab you had last night. There are only three working wind bouys along the entire coast of Washington State. That puts the fisherman who caught that crab at huge risk because he or she can’t tell whether it is blowing up a gale or flat calm where they left their traps. We owe an information infrastructure, as a matter of justice, to those who work in the elements. Every time a mariner dies, because we as a nation demand food but won’t provide resources, we have become party to the same moral breakdown that leads to cops killing kids in Ferguson, MO. If a mariner dies or is injured catching the fish you eat, and you have not acted so your government provides the resources for safe fishing, you are as morally guilty as those who armed Darren Wilson and created the situation where he killed Michael Brown.

OK, back to the travelog. We made it into Westport, WA just before noon yesterday on a two-knot flood current. We are back in the part of the world where tides and currents are a regular part of passage planning. After fueling the engine and dumping the holding tank, we tied up at the visitor’s dock to await Lorelette’s coming down to pick up Ken, who needed to catch a plane this morning back to the real world of Apple. We also needed to wait for the current to change so that we could get out of Grays Harbor.

With just three of us on board, there’s lots more space, but less down time. We are on rotating four-hour watches, so that in each twelve hour block each of us gets a four-hour sleep, four hours to be on standby, cook, write blogs, relax, and four hours at the helm.

For most of the afternoon and into the evening, the wind magnet on our anchor roller continued to work just fine; we had 15-20 kt winds right on our nose. It began to die down at about 10 PM and for the last half of my watch, the wind remained under 10 kts. Seas were a bit rough and confused, but as the night wore on, they flattened out. Right now, it’s primarily long-period westerly swells, resulting in a fairly flat ride, but a bit of swing, depending on how we hit the peaks and troughs. 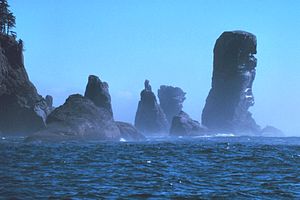 The weather forecast for the entrance to the Strait of Juan de Fuca today:

E wind to 10 kt…becoming NE 5 to 15 kt in the afternoon. Wind waves 2 ft or less. W swell 3 ft at 10 seconds.
And which way are we headed? You guessed it: East (but don’t tell Aeolus; he might forget we are actually headed south-east!). We’ll see. We might get some sailing in!

View all posts by Walt Knowles