Today is what we all thought would be the entire trip. The lovely rhythm of the ocean, the hum of the diesel, and the tasks of just keeping going.

We topped up the water tanks, sewed the knots on the running backstays, neatened the decks, made sure that all the lazarettes were locked down, turned in the keys, and stowed the bike, and pulled out of Oxnard’s Channel Island Harbor at 1000. We pushed the engine pretty hard to Ventura (about five miles), and then throttled back to a high cruising 2600 RPMs which gives us about 7kts on the water. The California Current runs pretty hard in the Santa Barbara Channel, and that, along with wind and waves, left us running at about 6kts over ground.

The engine sounds like it loves the work. The little clicks and thumps you hear from an engine that has been too long stopped are beginning to fade, and it sounds increasingly smooth and happy. Here’s hoping it stays that way.

Mike and Sandy set up Snow Shoo quite well for long distance cruising. One of the nicest things, on a trip like this, is the autopilot. All autopilots can steer to compass, but the autopilot on Snow Shoo can sail to a wind angle, a GPS location, and for us, most importantly, to an entire route. Hans and I programmed in Don Douglass’s “Express Route” from Exploring the Pacific Coast, and told it to track the course. You still have to stand watch (with three computer programmers on board, we know not to trust the beasts!), but it makes life a lot easier.

We also are on a rotating four-hour watch. I prefer three-hour night watches, but this is a whole lot simpler, particularly since we will be trying to catch up.

Point Conception, according to the Coast Pilot, is the “Cape Horn of North America.” This may have been the case back in the days of square-rigged sailing vessels, but Don and Reanne Hemmingway-Douglass think it’s the “Cape Horn of Southern California.” For us, it was the “Point No-Point of Southern California.” We were met by a large pod of dolphins, welcoming us to the waters of Northern California, and rounded Point Conception in smooth seas and light winds in the waning light of a nice sunset.

Our sail plan is slightly changed due to the engine problem; at 0400 on Wednesday, we are about 170 nm from Half Moon Bay. Those with an arithmetical bent will quickly calculate that it’s about 30 hours away, if we don’t stop. It’s almost a full day from Half Moon Bay to Oakland, and so to meet up with Paul and Ken and not to stick them with a night in a flea-bitten motel waiting for us, I’m planning to put in at the Pillar Point Harbor in Half Moon Bay to meet them. 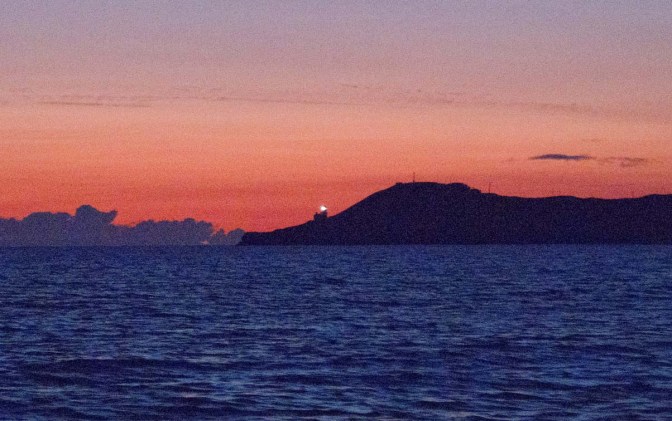 Point Conception and light from the south at about 2030. As the chart tells us, Fl 30 secs

The North Star is no longer abeam Show Shoo; it’s off the starboard bow, and it calls Snow Shoo to her home nearer the true north. After all, Moodys were built in Plymouth, England, for northern latitudes. Off we go northerling, hearties!

View all posts by Walt Knowles

One thought on “A right turn to the North Star”